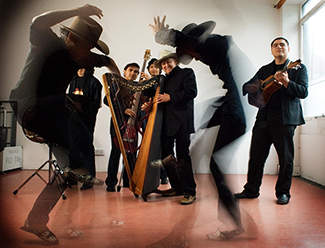 The Colombian and Venezuelan plains region is home to one of the most engaging musical traditions, the joropo, a musical genre created by ranching people of the Orinoco River plains to accompany their tasks with the cattle. 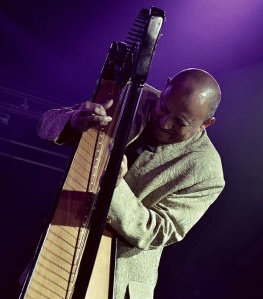 In an interview with harpist Carlos Rojas, founder and  leader of CIMARRÓN, a joropo musical group from Colombia, we explore their experiences that go beyond participating and winning awards in the most important international music festivals: it is actually a community learning experience that attracts and educates young people about their rich cultural heritage.

The joropo repertoire revolves around a lyric infused with rural everyday life, and a powerful instrumental music based on bandola, harp, cuatro, maracas, and an unique addition for Cimarrón: cajón (Afroperuvian box). Also known as música llanera (plains music), joropos were composed during tough rural work, amidst the sunrise light, the smell and mooing of the cattle. It´s astonishing how such a tough work can inspire so joyful rythmical music.

Cimarrón’s plains music has several distinctive features. One is that even though joropo is mostly sung by male singers to accompany their chores when they push the animals on, or riding point for the cattle to follow. Cimarrón on the other hand has a unique woman´s voice, Ana Veydó whose timber is closer to a “recio” (hardy) way, which is mostly a male singers tone .

Intertwining tradition and creativity are at the core of Cimarrón´s music. Maestro Carlos Rojas says that “in the plains, the word cimarrón means wild bull. It is a cattle who couldn´t ever been lassoed, nor taken to the corral and has never been subjugated by any owner´s branding. Hence, a cimarrón is an allegory of freedom”.

With this wild energy, Cimarrón became a space for innovation especially attractive for younger Colombian musicians: “We depart from tradition, we support ourselves on tradition, but we know that we owe our creativity as a tribute to tradition. In order to be faithful to our traditions, we have to create our own language in that music by being always transformative, dynamic and refreshing”, says Maestro Rojas.

The fever for pushing boundaries comes from the wild heart of this music as much as from the young generation assimilated through a deep sense of belonging. The youngsters bring not only their virtuosity, but also “new conceptual, technical, esthetical aspects, and, especially, their own voices” according to Maestro Rojas. His pride is particularly centered in the coexistence among young musicians -who are between 17 and early twenty years old- and the more experienced ones as part of Cimarrón, the learning community project. The dominance of the stage showed by these young players is mesmerizing. It is evidence of the profound learning that goes on inside the group and the fact that the musicians began to play their traditional music since their early childhood, just as Maestro Rojas did himself.

Founder, leader and harpist, Carlos Rojas began his career when he was a child by watching an old harpist who came every evening to play in a bar located around the corner of his house in his hometown, San Martín de los Llanos. When he first touched a harp, he already had the music in his memory after listening endlessly to his anonymous harp teacher.

From there, Cimarrón made a long successful way to us today: founded in 1986, it has performed in 32 countries, it was invited to major international Festivals such as the WOMEX (2008, Seville), WOMAD (2009, London), Flamenco Festival (2010, The Netherlands), Shangai Exposition (2010), and won numerous international awards, such as Best Latin Album (2012, Independent Music Awards), Nominee as Best Traditional World Music Album (2005, Grammy Awards, USA), Best Show of Traditional Music (2014, Lunas del Auditorio, México), among others; they recorded “Sí, soy Llanero” and “Cimarrón. Joropo music from the plains of Colombia” with Smithsonian Folkways Recordings (Washington, 2004, 2012). And finally, Cimarrón and joropo music began to be adopted and recognized in the urban areas of Colombia along with other popular music such as vallenato.

As the interview was flowing during the end of Globalquerque 2015 at the National Hispanic Cultural Center, Mr. Rojas was thinking over joropo music genre which most of the time is labeled as a mestizo product of “centuries old-Spanish, African and New World musical traditions” (*). He tells us that as he was listening to balafon solo player Lansiné Kouyaté with Kassé Mady Diabaté, he had the deep feeling that “we are all made almost with the same essence. Tonight it came back to me the reverberation of something essential to Latin American music: the Africanness”.

Cimarrón brings a music inspired by the past but deeply grounded in the present, capturing the audience with in crescendo instrumental textures, defiant and wild, but still, keeping the simplicity of everyday life of plains peoples from the Orinoco river.